Here’s a picture of one of my favorite hikes taken in The Enchantments about ten years ago: 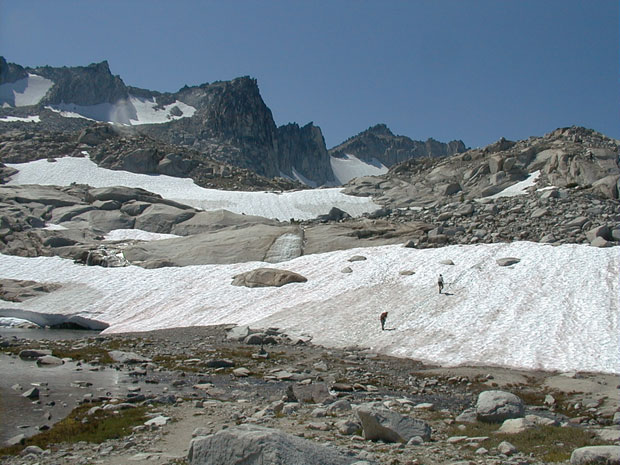 Here’s another picture taken on the same hike, a picture that was never taken, though the hike was definitely taken, and everyone was really there. Of course, I wasn’t in the picture because I was behind the camera, as I often, perhaps too often, am. 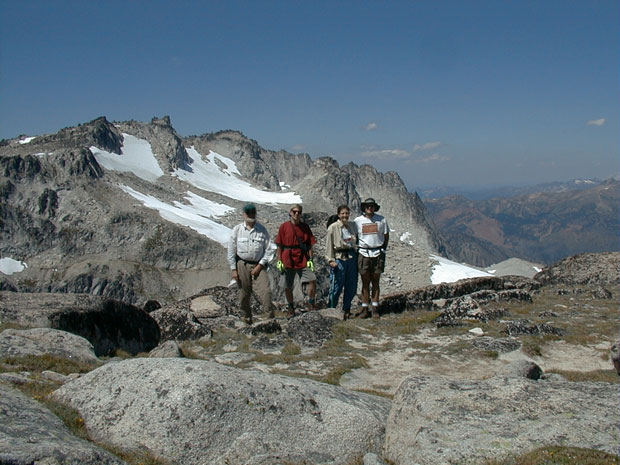 Which raises the question, is this picture a fake or is the picture without me a “fake?” Which is the better record of history?

I have two rolls of film from this hike but I’m only in one of the pictures, and it wasn’t this one, though I’m in it now and I belong in it because it’s a more accurate picture than the one that this one replaced, the one where I stood behind the camera and took this picture. Surely anyone who takes a picture is a participant in that picture.

Luckily, in this case Bill took the camera right afterwards and took another picture of me, Dawn and Rich standing together, so it was relatively easy to splice myself into the picture without having to replace shadows, highlights, etc.

Learning to manipulate pictures as I’ve been doing lately has been an interesting experience, one that has raised questions about “history,” photographs, and memories I’ve never really thought too much about before, as well as a few I have thought about.

For instance, despite the fact that I have many fond memories of cars I’ve owned, I didn’t have a single picture of any of them. In the series I ran here I had to go online find a picture of a car like the one that I owned, then manipulate the picture to make the car look like the one I owned, and place it into a picture that I had taken when I owned the car. Some of them were quite convincing, others less so, but all of them captured a certain “truth” although they were all lies, lies of the memory. So, were all those pictures “lies,” mere distortions of reality, or were they more accurate memories of the past than my collection of photographs?

Some of the questions I’m beginning to ask myself are probably more important to an old man sitting in front of his computer looking back at his life than to anyone else, but in a society that increasingly relies on new forms of media it is perhaps a question all of us should be asking ourselves.

4 thoughts on “The Picture that Never Was”