Try as I might, I cannot totally ignore today’s politics even though this blog is supposed to be devoted to “exploring a philosophy of life, particularly as related to poetry and literature in general.”

I’ve studiously ignored today’s National Day of Prayer. After all where’s the fun in satirizing an organization that would choose that paragon of Christian values Oliver North as “Honorary Chairman?” Mormons should feel honored that they have been banned from delivering speeches by the national committee in charge of the day

What I can’t ignore, though, is an organization called “Swift Boat Veterans for Truth,” (do you really think that title wasn’t created by the same political hack who came up with “Clear Skies” and “The Healthy Forests Initiative”), an organization I discovered while innocently reading Joe Duemer’s Reading and Writing.

As previously pointed out, I was a 1st Lieutenant in Vietnam. Like the “Swift Boat Veterans for Truth” I once wrote a letter to the the local newspaper arguing that it was unfair to paint all Vietnam veterans with the same brush and that the majority of the soldiers did not give in to their natural hatred of an enemy that was trying to kill them and commit atrocities.

Unlike most civilians, though, as a young lieutenant who saw friends killed regularly during my tour of duty, I could understand why such incidents took place. Anyone who thinks that you can kill people without first de-personalizing them, without first making them something less than “human,” doesn’t really understand the psychology of warfare. Atrocities may well be an inevitable part of war because the “rules of war” often don’t make sense in a world reduced to daily chaos.

Thankfully, I did not personally observe any of the atrocities others have noted in Vietnam. However, I heard far too many officers bragging at Officer’s clubs not to believe such atrocities did occur. It was also widely known that when Americans turned prisoners over to ARVN that they were being tortured.

To deny that such atrocities took place or to argue that superior officers were never aware of such atrocities is, in my mind, plainly absurd. If you weren’t aware that such incidents took place, you sure as hell were too dumb to be given control of a large military unit, which, of course, isn’t the same as saying that superior officers could have stopped all such incidents from taking place in the heat of combat.

But to deny their very existence, or to deny that an unpopular war that drafted unwilling citizens didn’t contribute to such atrocities is absurd. Perhaps in his political zeal to end the war Kerry did overstate the extent of such atrocities, but since when has it been unusual for politicians to overstate their case?

What’s truly incredible to me, though, is that the “Swift Boat Veterans for Truth” can extrapolate from their argument that because Kerry overstated the extent of war atrocities in an attempt to end the war that he is somehow less fit to run the country in a time of war than George W. Bush, who never seemed too concerned about Vietnam atrocities while safely (not) serving his military duty in Alabama.

Are these “superior” officers concerned that Kerry wouldn’t allow the Americans to achieve ultimate victory in Iraq by torturing and humiliating Iraqi prisoners? 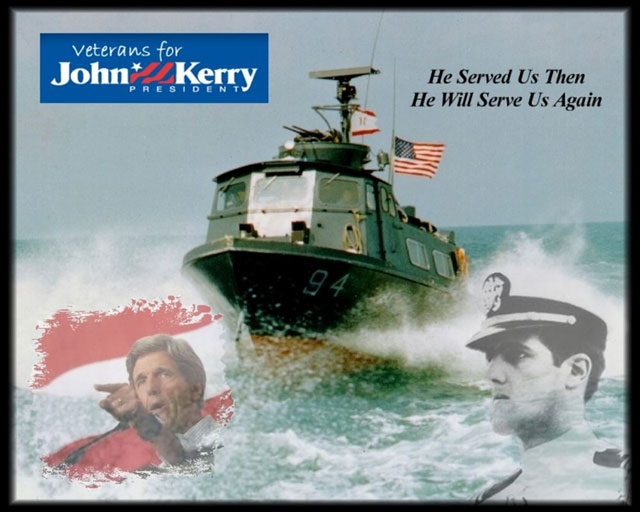