If you follow this site at all, you probably realize that I’ve spent a lot more time outdoors than I have inside reading since the sunshine returned, at least until tomorrow. Unfortunately, much of that time has been spent working in the yard.

Fortunately, the rest of it has been spent out walking. Sunday was no exception. We spent the day at Theler Wetlands in Belfair.

I got a few bird shots and some shots of plants, but just to prove I’m not beyond an appeal to blatant sentimentality to boost readership, I thought I’d resort to two shots of fawns with their mommy that Leslie pointed out to me while I was fixated on getting pictures of a Spotted Towhee. 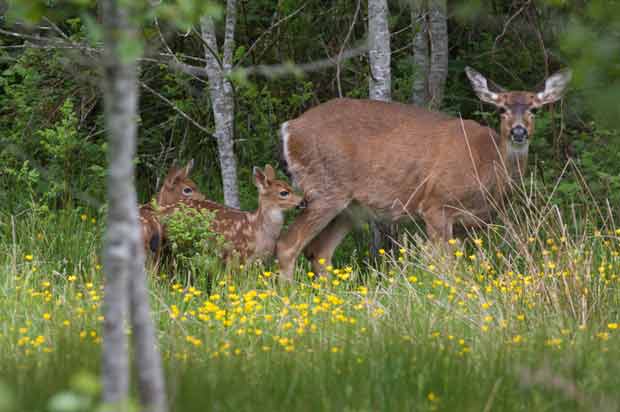 And here’s a better, second shot.

Of course, when I took the second shot I actually thought there was only one fawn in the shot because I didn’t see the one hiding under the mom. Thank goodness for cheap, digital “film.”