I guess I blew away iTune’s bot when I ordered Jeff Lorber and BB King right after ordering Van Morrison.

Now it’s spitting out weird recommendations, the weirdest being Kenny Chesney’s The Road and the Radio, which generates the error message “The item you requested is not currently in the U.S. store.‚Ä? Since I’ve never heard of Kenny Chesney, I have not idea why he wouldn‚Äôt be in the American Store, unless he’s an Australian country western singer.

Equally bizarre is the soundtrack from Garden State, a movie I never heard of with a hodgepodge of groups I’ve never heard before and who, with the exception of Simon and Garfunkle, hope to never hear again.

It really went over the top recommending “Diamonds from Sierra Leone,” featuring Jay-Z, with EXPLICIT lyrics, followed by Ray Charles’ “America the Beautiful.” I can only hope that the idiot that programmed Walmart‚Äôs bot hasn‚Äôt been hired by iTunes. I’m afraid one of us is schizoid, and, despite the two of me that look back from the bathroom mirror every morning, I don’t think it’s me.

If that weren‚Äôt bad enough, I went online to Amazon today, only to discover Leslie has apparently been using my browser again. Why is that women have so much trouble understanding boundaries, failing to realize that I expect to be greeted by books on zen, modern poetry, or expensive camera accessories, not pop-up books or tennis shoes? 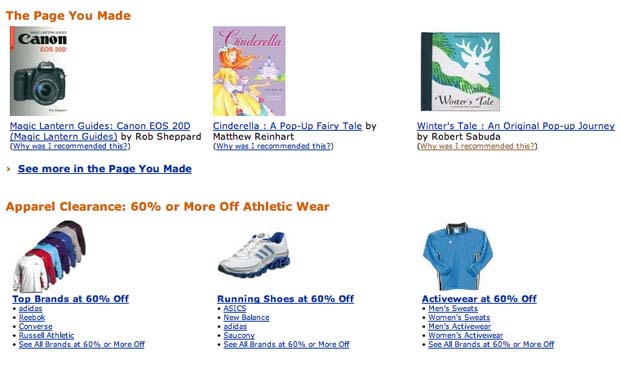 It only takes one incident like this to make you realize just how dumb bots really are. After all, if it were a real person looking at what I‚Äôve looked at/bought, they‚Äôd know immediately that these were aberrations and that somehow the woman of the house had managed to get her hands on the remote control.

In other words, they‚Äôd know immediately to throw this sample out. How likely is it that a man‚Äôs man is actually going to buy any of these things, other than possibly the Canon book? In other words, they wasted a perfect chance of making a quick buck off another sucker. I hate to imagine what might be awaiting me in my Gold Box.

Now, considering these bots were designed by experts for some of the savviest companies out there and they‚Äôre still about as dumb as Skye, my fixated Australian Shepherd, how smart do you think government bots designed by the lowest bidder are? What happens when bad data is dumped into NSA bots?

Were you really surprised FBI agents complained that NSA-provided information ended in an endless string of dead ends? I worry, of course, how comfortable neighbors felt when FBI agents interviewed them about their neighbors‚Äô phone calls and books checked out from the local library. I do know I felt a little uncomfortable when my neighbor‚Äôs car was towed from his driveway at 2:00 a.m. in the morning by the police, even if it was back in the driveway by noon the next day. For a while, Skye wasn‚Äôt the only one running to the window to check out odd noises at night.

It‚Äôs one thing to have to look at a page full of pop-up books for a week or two until I have time to browse for more manly items; it‚Äôs something quite different to have your neighbors peeking through their curtains at you for the next year wondering if that‚Äôs bomb material you‚Äôre taking into your garage in those shopping bags.

It’s hard to imagine a better reason to make sure our government isn’t spying on us regularly without court supervision. Innocent or not, there is just too much that can go wrong when spying becomes widespread. You only need to take a look at what happened in East European communist countries during the cold war to see the danger of mass hysteria and the perceived need to spy on each other. Of course, many Americans would think that I’m paranoid, but judging from the phone calls The American Civil Liberties Union doesn’t think so. If you’re worried, you might want to take a look at their site.