Although at first appearance Archibald MacLeish’s "Conquistador" seems merely an accurate recreation of Bernál Diáz’s history, further analysis reveals some subtle conflicts that are not evident at first but that reflect themes developed in other MacLeish poems.

On one level, the poem can be perceived as more sophisticated version of Bruce Springsteen’s "Glory Days." Diáz is looking back at a glorious heroic event he participated in, but we, the reader, already know that he wil end up living in the land he conquered with an Indian wife who he certainly does not love and with children who he disdains, and a feeling that his efforts have been denigrated because he is merely a commoner. At first these events may seem unrelated, but as we read we discover that the heroic conquest of Mexico contained within it the very seeds of his destruction. The poem might well be called the "Tragedy of Bernál Diáz," commoner.

It is this tension between the heroic victory and the personal failure that gives this poem its power. 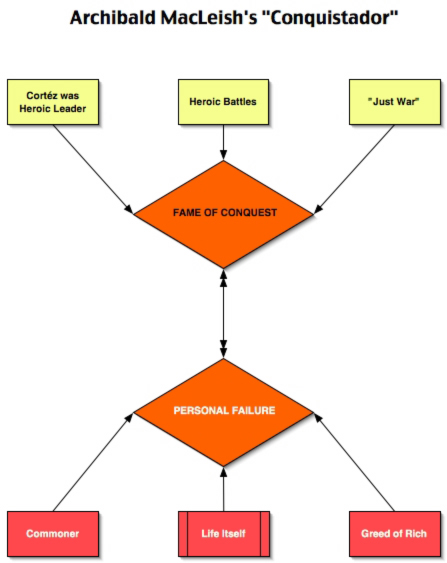